DENVER, CO, September 14, 2020 –Last week, the COGCC Commission discussed the possibility of its final proposed rules requiring a 2,000-foot setback for oil and gas development from homes, schools, and other protected areas. The distance is further increased based on measuring from the boundary of the well pad. The possibility of a 2,000-foot setback comes as part of a rigorous rulemaking process required by Senate Bill 19-181 – legislation considered a sea-change in how the oil and gas industry is regulated in Colorado.

The previous setback distance for oil & gas operations allowed massive industrial drilling operations to take place as close as 500 feet from homes and 1,000 feet from schools and high-occupancy buildings. However, the industry could often override those setbacks with a waiver from the Commission. Scores of medical studies and scientific research, along with dozens of explosions, gas leaks, and evacuations demonstrate the increased risk of severe long-term and short-term health impacts of living in close proximity to oil and gas operations. As recently as October 2019, the Colorado Department of Public Health and Environment released a long-awaited study that confirmed the “possibility of negative health impacts at distances from 300 feet out to 2,000 feet.”

“Colorado Rising has been at the forefront of this issue for years, including spearheading Prop 112 for safer setbacks in 2018. We continue to encourage the Commission to adopt a 2,500-foot setback, but a 2,000-foot setback would be a good start and far more protective than the woeful setbacks under the previous rule,” said Joseph Salazar, Executive Director of Colorado Rising.

In 2018, Colorado Rising was the driving force behind Initiative 97/Prop 112 – a statewide ballot initiative that would have established a 2,500-foot buffer zone between new oil and gas operations and all homes, schools, hospitals, parks, playgrounds, and drinking water sources. Despite over $40 million in oil and gas industry spending to defeat the measure, Initiative 97/Prop 112 collected over 172,000 signatures and generated nearly 45% (over 1.1 million votes) in support at the polls. Organizational efforts to run a similar measure in 2020 were cut short due to COVID-19.

Salazar affirmed, “We represent communities in Broomfield, Erie, Thornton, and Commerce City where oil and gas operations are right on top of neighborhoods and where residents are suffering adverse health effects. SB 19-181 finally mandates that the Commission prioritize people and our environment over oil and gas profits. We remain cautiously optimistic that the Commissioners will adhere to their statutory mandate.”

Colorado Rising is a statewide, 501(c)4, grassroots coalition of people and organizations working together to protect our communities from the dangers to public health and safety of fossil fuel operations to promote the transition off fossil fuels, and to protect our environment for future generations. 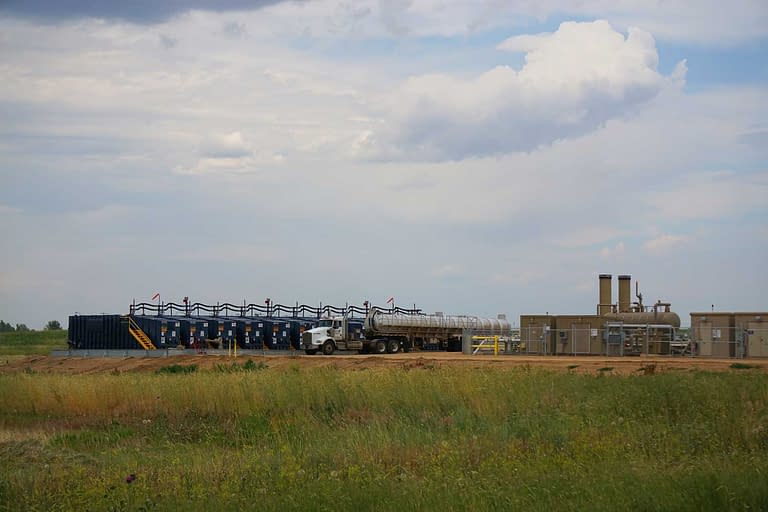 We moved to Erie from Boulder County after we both retired in 2015. We were attracted to the incredible views of the back range, our great neighbors and neighborhood, and

We have been residents of Colliers Hill since February of 2020. We researched the area and visited it many times before we finally bought/built it. We retired from our careers

Photo of drilling site in Erie. “My name is Kelsey and I live in Colliers Hill, just a half-mile from 28 oil & gas wells. My family and I relocated